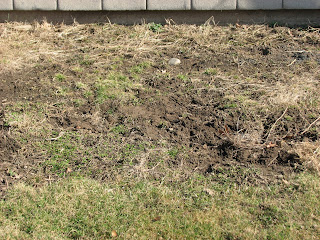 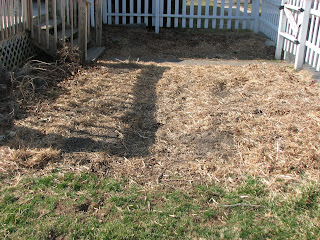 I've moved a lot. And when I say a lot, I really do mean a lot. Since I graduated from college, I've probably moved close to 15 times (and I'm not that old). My family used to joke that they waited to get my new address every year. Most of the moves weren't terribly far away from each other. But they were enough to prevent me from really digging roots (literally) in one place for too long. And as someone who truly loves to garden, this hasn't always been easy for me. One good thing that has come out of it, though, is that I've had a chance to start from scratch in a variety of places and situations. It's always fun to look at an empty piece of land, imagine the possibilities and get to work! (I also think there's an interesting parallel between garden planning/preparation and Lent. We do physical work in the garden with the hope of a bountiful harvest, and we do spiritual work during Lent with the hope of the Resurrection at Pascha.)
Last year was our first summer at our new house. I was so excited to start up a new garden... one that would be a bit more permanent than all the other gardens I've started up throughout the past several years. But when it came time to get work on it, I had a newborn baby to care for. It seemed as though every time I put my shovel to the ground, he would want to nurse. So, I did what any realistic woman would do... I put my shovel down. And I didn't pick it back up again for the rest of the summer.
What about the garden, you wonder? Oh, I had a garden, of course. But I didn't remove a single inch of sod, and I didn't dig a single inch of soil. I converted a portion of my lawn into a garden "no-dig-style" simply by letting time do the work for me. It was so easy and lots of fun! My three-year-old son actually did most of the work with me.
One of our neighbors offered up her newspapers. We laid them down on top of the lawn. I found a few cardboard boxes in our basement and covered as much of the newspaper as we could with them. Then we noticed that another neighbor had several large bags of leaved out for the trash. After several trips back and forth with our trusty litte red wagon, we dumped out all of the leaves on top of the newspaper and cardboard. Next, a friend of mine picked up several bales of straw in her truck and we spread a really thick layer of straw on top of everything else. Jacob's favorite part was when he took charge of the hose. He sprayed it all down to moisten things up and that was it!
Since our compost pile was too young to have generated any compost, we picked up a couple bags of leaf compost. Then I spread the straw around, dumped in a few handfuls of compost, and planted my seedlings. All in the same day. So much easier than all that backbreaking digging!
Now I won't lie and say it all took off quickly. It didn't. (And in the meantime I had to answer some questions from people who were wondering why I was putting all that straw on my lawn.) From what I understand, it's more ideal to wait a while to plant so everything has some time to break down a bit. But, time was not on my side. I wanted a garden and I wasn't going to miss a growing season!
After some time went by and the plants seemed to be stalled in their growth, my husband started remarking that it didn't seem as though my garden was going to do so well this year after all. But I did not give up hope. As the saying goes, "All good things take time." I just figured it was taking a little extra time for the roots of the plants to dig down through the sod and the hard top layer of the soil. Sure enough, things sure did take off! I harvested enough tomatoes to not only make and freeze sauce for ourselves but to share with all of our neighbors, too.
The other day, the weather was absolutely beautiful, so I had a chance to check out how everything looks underneath that straw. I'm excited to say that, except for a light covering of straw, everything has broken down into a nice, rich, crumbly soil! So, after all of last year's beginning "hard" work, I'm hopeful about another season of fresh veggies from the garden.
The picture on the left shows the garden space I started last year, all ready to get going for this year. The picture on the right is Jacob's garden. Last year, all I could plant with him was some sunflowers. He ended up taking over the rest of his garden as a digging site. This year, my plan is to expand his garden space toward our composting area to give him more room to grow things in, and as a great bonus, less lawn to mow (don't get me started on my thoughts about lawns!). I'd also like to take out the bushes alongside of our house and plant something a little more useful (like blueberries) instead, but I haven't quite convinced my husband on that one... I'm hopeful :-)
Posted by Stephanie at 11:21 PM

I also enjoy gardening--flowers or veggies. But I would not call myself an expert by any means. I don't know any of the tricks or even half of the flower names. But it is so rewarding to put a tiny seed in the ground and see what comes out of it!