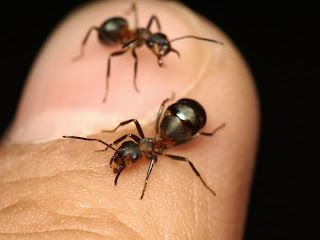 "O God, enlarge within us the sense of fellowship with all living things, our little brothers to whom Thou hast given this earth as their home in common with us. May we realize that they live not for us alone, but for themselves and for Thee, and that they love the sweetness of life even as we, and serve Thee better in their place than we in ours."
- St. Basil the Great
It always saddens me when I see a child purposely stomping on ants or worms, or someone killing flies with a fly swatter (what an awful contraption!). As though their lives hold no meaning or purpose. As though God did not create even the smallest of creatures out of His love. So when my son ceremoniously picks up worms off of a dry sidewalk and places them into the cool, moist soil, or lovingly constructs little houses for his friends the ants, I am filled with joy that there is hope for the creatures. That it is possible to cultivate in our young ones a reverence and respect for all of life.
I recently read a wonderful book, "Salt of the Earth," about Elder Isidore (1814-1908), of Gethsemane Hermitage in Russia. It was beautifully written by his spiritual son, New Martyr St. Paul Florensky, in a way which drew me into the life of this holy man and made me feel as though I had come to know him personally.
Of particular interest to me was how he showed such loving kindness to God's living creatures. He sang the Psalms of King David to a frog who lived in his garden. And not only did he feed wild animals and birds, but he also prayed for them and acted as their guardian. On one occasion, he rescued a sparrow from the clutches of a cat's paws and brought the bird into his cell to live until her wounded wing was healed.
And one of my favorite stories is about how Elder Isidore lived in harmony with mice in his cell.
Once he was asked, "Father, don't the mice ever bother you?" The Elder smiled: "No, they don't bother me at all. I feed them lunch and supper and that keeps them quiet. Before, they would claw their way all over the cell. But now I put food out for them to eat -near the mouse holes- and they don't run around anymore. No, they don't bother me at all."
Now I'm not suggesting that we should all share our homes with mice and ants. Most of us (myself especially) are far from the holiness of Elder Isidore. And there are certainly some potential health hazards involved, for young children in particular. But should our treatment of creatures be dependent upon whether we deem them to be cute and cuddly? Isn't it possible for us to take some steps to try to be kinder to all of God's creatures?
We have had our share of mice, bees, ants and the like wanting to raise their families in our house. Like I tell my son, we don't have any problem with visitors, but we don't have enough room in our house for everyone to move in. So, we do what we can to gently encourage them to make their homes in the great outdoors.
We have had great success discouraging ants in our home by sprinking a lot of cinnamon near their favorite entryways (They don't like to cross it.). Humane mouse traps (or "mouse houses" as my family calls them) worked wonders at helping our resident mouse stop his late-night parties in our living room sofa. (Although it did take a 15 minute train ride out of town to help him forget his way back!) And last year, there were some bees building a hive in our bathroom window. While it was a long time until we could open our window again, the bees eventually did leave. In the meantime, we were given the blessing of being able to watch them close-up as they built the hive, something we most likely won't be able to witness that closely very often.
We may have had some minor temporary inconveniences in our attempts to be kinder to God's creatures, but the blessings far outweighed the costs. St. Basil the Great once said, "The wisdom of God is revealed in the smallest creatures." What is more spiritually edifying, stomping on an ant, or taking the time to marvel at one?
Posted by Stephanie at 9:09 PM

Wow. Beautiful, indeed. Thank you for this! You have given me to much to ponder on this afternoon.